Iniquity, Sin and Transgressions: Breaking Free from Bondage and Addiction

Around the 2010 time frame, I danced around the topic of iniquity in some other blogs without really understanding it's relationship to sin, transgressions and bondage (or captivity and addiction).  But recently I've been encouraged to study the concept further.

As a result, I'm challenging the defacto teaching around iniquity, sin and transgression that suggests they are just different levels or severities of offense.  In example, one might suggest that abortion and murder is iniquity, stealing much money is a sin, but exceeding the speed limit by 5 MPH is just a transgression.

I'd like to suggest that such a concept of parceling sins into escalating offenses is a corruption that enables us to create standards for behavior contrary to our personal belief systems by which we dispense judgements against humanity.  Just such a thing is what many Christians do best: create sorting systems for sins resulting in varying degrees of judgements, penance and punishments - Dante's Inferno, for example.


I acknowledge my sin unto thee, and mine iniquity have I not hid. I said, I will confess my transgressions unto the Lord; and thou forgave the iniquity of my sin.

In Strong's Concordance of the Bible, 'iniquity' is indexed at H5771.  It is derived from H5753, and it means "perversity."  Sin, on the other hand, comes from H2403, and it means "an offense."  So then, does the offense create perversity, or does perversity give rise to the offense?

Lets look at the problem from something a bit more concrete: Adam and Eve.  Adam made a choice, Eve was deceived.  Both sinned.  We call it original sin, the lynch-pin from which humanity is bound in unrighteousness.  So, did the sin cause the perversion, or did perversion cause the sin?  Many people will suggest that the reason Adam and Eve sinned is because satan corrupted Gods word; he created lie, or a perversion of the truth.  From this perversion then, sin and transgression arose.

In the New Testament Paul enumerated a number of sins he called the "deeds of the flesh."


You were running well; who hindered you from obeying the truth ... For you were called to freedom, brethren; only do not turn your freedom into an opportunity for the flesh ... walk by the Spirit, and you will not carry out the desire of the flesh. For the flesh sets its desire against the Spirit, and the Spirit against the flesh; for these are in opposition to one another, so that you may not do the things that you please ... Now the deeds of the flesh are evident, which are: immorality, impurity, sensuality, idolatry, sorcery, enmities, strife, jealousy, outbursts of anger, disputes, dissensions, factions, envying, drunkenness, carousing, and things like these (Gal. 5:7-21)

The question then becomes, what exactly is the flesh?  Well, for starters, it's not your body.  Although it appears that Paul generally speaks of it in this way, the flesh is instead used to describe a contrary-to-God state from which sin flows, the human nature, or principle of evil, the law of sin that we carry with us.


But if I am doing the very thing I do not want, I am no longer the one doing it, but sin which dwells in me.  I find then the principle that evil is present in me, the one who wants to do good. For I joyfully concur with the law of God in the inner man, but I see a different law in the members of my body, waging war against the law of my mind and making me a prisoner of the law of sin which is in my members. Wretched man that I am! Who will set me free from the body of this death? Thanks be to God through Jesus Christ our Lord! So then, on the one hand I myself with my mind am serving the law of God, but on the other, with my flesh the law of sin. (Romans 7:20-25)

What we find then in scripture, is the concept of two natures: the sin nature, and the Holy Spirit nature.

So, where does this leave us?  Is there a difference, does God forgive both?  Yes, He forgives both; yes there is a difference.  Therefore, Paul describes the law of sin as the controlling force responsible for sin.  The law of sin, then, is iniquity: and thou forgave the iniquity of my sin.


Therefore consider the members of your earthly body as dead to immorality, impurity, passion, evil desire, and greed, which amounts to idolatry ... in them you also once walked, when you were living in them. But now you also, put them all aside ... since you laid aside the old self with its evil practices, and have put on the new self who is being renewed to a true knowledge according to the image of the One who created him— a renewal in which there is no distinction between Greek and Jew, circumcised and uncircumcised, barbarian, Scythian, slave and freeman, but Christ is all, and in all. (Colossians 3:5-11)

The lesson we take from this is that there are two ways to live: from the point of unrighteousness and from the point of righteousness.  While we must deal with sins and transgressions, we also must eliminate the source from which they are birthed: the iniquity itself.  One way this is done is through the Armor of God (Ephesians 6).  Another way we do this is rejecting the lies we believe and knowing the truth (John 8:32).  And yet another way we do this is turning towards God with our heart, so that our minds may be unveiled (2 Corinthians 3:16).  Consider also that we are putting to death the deeds of the flesh (Col. 5:3) and working to put on a heart of compassion (Col. 3:12).

But most important, we must realize that dealing with sin and iniquity are different.  Sin is the "what."  Iniquity is the "why."  We can confess our sins of lust without dealing with the why of the lust.  And that's where your journey to true freedom will begin: by rooting out the whys of your sins.

But the crux of the matter is that we must learn to live from a point of experience, rather than a point of declaration.  While it's wonderful that God has declared us righteous, it is another thing entirely to live and walk from that perspective.

If you're like me, it helps to see things.  This isn't a perfect model, but it does help us visualize how we live in both the new and the old: 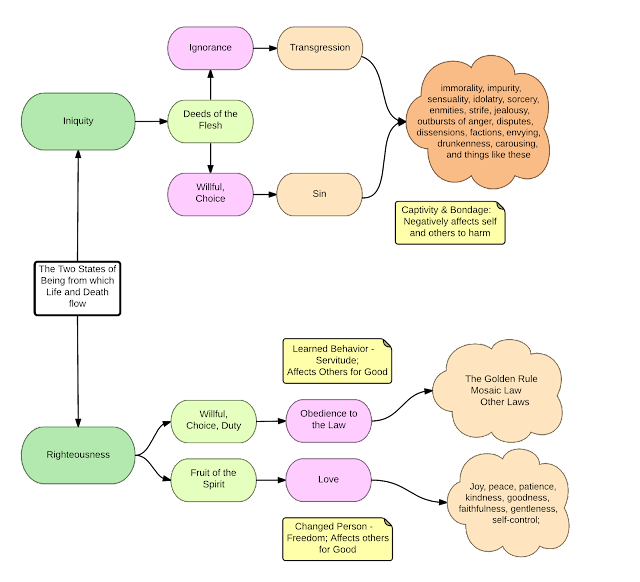