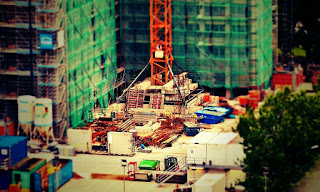 I recently read a post entitled "Why They Don't Sing in Church." While it's informative and raises good points, I found that it hit on some of my pet peeves regarding how people think about their relationship with the Body of Christ, Worship, and God in general.

Who and what is The Church

When addressing spectator set-up, it was suggested that "the church has constructed the worship service as a spectator event," which begs the question: who's the church? Clearly, it's not the "congregants" referred to in the next paragraph of the aforementioned blog.

But there's a deeper problem in Christianity today and it stems from how the Bible, particularly the KJB, was translated and subsequently, all later versions.

In the Tyndale Bible (the Bible which the KJB follows most), the word church appears only two times, in the book of Acts. In both instances, it refers to a place of pagan worship - as it does in every other language in which it's found. Secondly, the word "church" was used in the KJB not because the translators thought it to be a superior word to convey the meaning of assembly, but because King James required that "the old ecclesiastical words to be kept; as the word church, not to be translated congregation" (here).

The effect of that rule moved the focus from the assembly and their relationship to God to a focus on the organization - the institution.  So when your pastor is complaining about the cost of payroll and utilities and follows it up with "you need to support your church," there's no question in your mind that it's the paid professionals that are considered as "the church" in that context.

Pride is a Symptom

What's wrong with the church can be found by tracing backward from one of its symptoms: pride.

Our pride is based on our sense of belonging, perhaps to our sense of being right and being associated with the correct group.  We take pride that our particular denomination or local assembly can trace its roots back to a 19th or perhaps even an earlier century congregation.  As a matter of fact, some people believe that if you cannot trace your church's pedigree through a lineage of properly confessing and baptized individuals to a first-century congregation, then you are not a part of a New Testament Church.  I'm not exactly sure what the converse of that logic means to those individuals, but given that they put such a preponderance of importance upon it, then surely it must mean that you're otherwise out of the will of God, or somehow otherwise cut off from His perfect will.

So, back to pride.

Having been a Presbyterian and a Baptist, I can assert that people who belong to those denominations do so because they believe their doctrines are better than the other groups' doctrine.  In other words, I was a Presbyterian because I believed they were right about their interpretation of the Bible (just as my Presbyterian friends believe today).  When I figured out that baptism was not for infants, I searched for a denomination that based their doctrine on what I believed was in concordance with Biblical teaching.

In other words, doctrine divides.  To many people, that's a great thing.  Because to them, not to worship in truth (correct doctrine) and spirit is anathema to proper living.  I have my doubts that they understand the spirit bit, but they've got a handle on truth - at least according to them.

The problem is that doctrine doesn't guarantee truth or correctness.  Jesus rebuked the Pharisees many times for their doctrines.  The Pharisees had tons of doctrine, but they were dead wrong.  And doctrine can't explain how God is loving, but hated Esau (Malachi 1:3); how He is the bright and morning star, yet veils Himself in darkness (Psalm 97:2), and how He hates divorce and yet is Himself divorced (Malachi 2:16, Jeremiah 3:8; and preachers call divorce a sin - might you try re-reading your Bible on that, SBC?).

Discernment - Anyone can do it

As I see it, Holy Spirit is much closer than we realize.  Our ability for clarity of thought is much greater than we know.  But we're going to churches where the preachers think the congregants are just plain stupid, to dumb to know any better.  And by-in-large, the people lap it up.  Perhaps it tickles their ears?  I don't know.

But I do know that we have an innate ability discern more than we realize.  Consider what Jesus said to the crowds:

Ye hypocrites, ye can discern the face of the sky and of the earth; but how is it that ye do not discern this time? (Luke 12:56)

There are two key things we must understand about this passage.  First, Jesus called them hypocrites.  Second, it's not about the this time or the face of the sky: it's about discernment.

In our day and age, we consider a hypocrite as a person who says one thing but does another.  But it goes deeper than that.  A hypocrite is also a person who does one thing in a certain context, but another thing in a similar context.  Paul accused Peter of being a hypocrite for his contradictory actions when with Jews and Gentiles.

The rebuke is about discernment: Jesus is addressing their hypocrisy around it.  In other words, they could to discern the face of the sky, but refused to discern the epoch, the time in which they were living.  In other words, they were hypocrites.  They weren't unaware, they didn't lack the ability to understand.  They were purposeful in their assessments.

What does this mean?  Everyone has the ability to discern good from evil, spirit from works.  You do not need to be born again in order to discern Life from Death, or right from wrong, or when God is speaking.

And therein is the rub for our good Bible Teaching Churches.  They believe that people can only understand, analyze or discern truth after being taught and exposed to the truth.  Apparently, Jesus disagrees.  That's not to say we don't grow into maturity, seeing that "solid food is for the mature, who because of practice have their senses trained to discern good and evil" (Hebrews 5:14).  But rather, what Jesus is talking about in this scripture is to be understood as the milk, the elementary principles of the oracles of God - which are about the Christ (Hebrews 5 & 6).

So what's wrong with the church is that we've traded doctrine for a relationship and good works programs for imputed righteousness.  We teach, learn and debate doctrines so we can be assured of our correctness and we do the good works so we can feel good about ourselves so that we can measure up to a modern Christian standard.